Victims say criminal charges against pope not a stunt

By Francis X. Rocca -
VATICAN CITY – A campaign to hold the pope responsible for "crimes against humanity" is not a publicity stunt, sex abuse victims say, even as experts doubt it will have much success at the International Criminal Court.
In a dramatic and unprecedented move, abuse victims filed a complaint that seeks to hold Pope Benedict XVI and others responsible for the "systematic and widespread concealing of rape and child sex crimes throughout the world."
Lawyers representing the Survivors Network of those Abused by Priests (SNAP) filed the 84-page complaint at the ICC in The Hague, the Netherlands, on Tuesday.
The filing calls for the investigation and prosecution of the pope and three other top Vatican officials: former Vatican Secretary of State Cardinal Angelo Sodano; current Secretary of State Cardinal Tarcisio Bertone; and Cardinal William Levada, a former archbishop ofSan Francisco who now has jurisdiction over abuse cases as head of the Congregation for the Doctrine of the Faith.
The four men are "responsible for rape and other sexual violence and for the physical and psychological torture of victims around the world both through command responsibility and direct cover up of crimes," said Pam Spees, a lawyer with the New York-based Center for Constitutional Rights, which filed the complaint on SNAP's behalf.
Vatican spokesman Rev. Federico Lombardi declined requests for comment. But Cardinal Crescenzio Sepe of Naples, former head of the Vatican's missionary office, told the Vatican Insider website that the filing was "the usual anti-Catholic attempt that tends in some way to obscure" the image of the church.
Tuesday's filing cites five cases of sex abuse which occurred in the U.S. and theDemocratic Republic of the Congo. The latter country, unlike the U.S. and the Vatican, is a party to the Rome Statute, which governs the ICC.
Vatican lawyers have argued that local bishops do not act as agents of the pope, noting that they do not receive their salaries from Rome nor work on Vatican property, and that the pope is therefore not responsible for their mishandling of sex abuse cases.
Various attempts to hold the Vatican responsible through the U.S. court system have repeatedly failed, usually because the pope, as the head of a sovereign state, is immune from prosecution.
On Tuesday, a leading authority on international law characterized the SNAP filing as an effort to attract publicity for the group's cause, which would not receive serious consideration from the ICC.
"There will be no follow-up," said Giorgio Sacerdoti, who teaches at Milan's Bocconi University. "It will be set aside."
Among the reasons the court is likely to view the sex abuses cases as beyond its jurisdiction, Sacerdoti said, is that they were not part of a "systematic" attack on human rights.
SNAP President Barbara Blaine denied that the complaint is a publicity stunt.
"We have submitted 20,000 pages of evidence that fully document all the crimes in a way that meets the criteria of the ICC," Blaine said. "Our attorneys have done due diligence."
Posted by GLBT and Friends at 10:43 AM No comments: 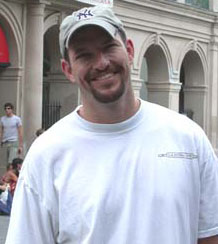 Mark Kendall Bingham (May 22, 1970 – September 11, 2001) was an American public relations executive who founded his own company, the Bingham Group. He died at age 31 in the September 11, 2001 terrorist attacks on board United Airlines Flight 93.

Bingham attended Los Gatos High School. He was a graduate of the University of California, Berkeley, where he was also president of his fraternity, Chi Psi. In college, he played for the UC Berkeley rugby union team and helped them win a string of national championships. 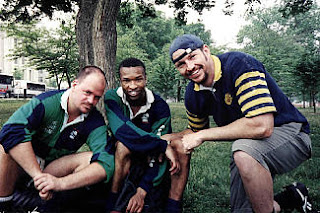 A large athlete at 6 feet 4 inches (1.93 m) and 225 pounds (102 kg), he also played for the San Francisco Fog RFC, a rugby union team. In 2001 most of the Fog were complete novices to the game, but Mark started showing up anyway. He coached, cajoled, and crashed through their practices, and played No. 8 in their first two friendly matches. He also played in their first tournament (where he promptly dislocated his shoulder). He taught his teammates his favorite rugby songs and made them feel like we were part of something bigger than themselves.
In May 2001, as a member of the Fog, he took part in the Washington DC Renegades Invitational Tournament. Although very few in number, most of the rugby teams extant at that time took part in the tournament. It was after the tournament that Gotham’s Scott Glaessgen, who had been inspired by the tournament and who had been friends with Mark since 1998, contacted Bingham about forming a rugby team in New York City.
Mark had recently opened a second office of his successful public relations firm in NYC and was spending more time on the East Coast. Mark was excited about the possibility and over the summer the two men started planning the formation of a New York City team the Gotham Knights RFC. On September 11, 2001 he boarded Flight 93 at the last minute, on his way to California to be an usher in his fraternity brother Joseph Salama's wedding.

Bingham was among the passengers who attempted to storm the cockpit of Flight 93 to try to prevent members of Al Qaeda, a terrorist organization, from using the plane to kill hundreds or thousands of additional victims as a part of the 9/11 attacks on the United States. He made a brief airphone call to his mother, Alice Hoagland (formerly spelled "Hoglan"), shortly before the plane went down. Hoagland, a former flight attendant with United Airlines, later left a voice mail message on his cell phone, instructing Bingham to reclaim the aircraft after it became apparent that Flight 93 was to be used in a suicide mission.
Bingham was survived by his boyfriend of six years, Paul Holm, who said this was not the first time Bingham had risked his life to protect the lives of others. He had twice successfully protected Holm from attempted muggings, one at gunpoint. Holm describes Bingham as a brave, competitive man, saying, "He hated to lose — at anything." He was even known to proudly display a scar he received after being gored at the running of the bulls in Pamplona.
Quote by Mark Bingham: “We have the chance to be role models for other gay folks who wanted to play sports, but never felt good enough or strong enough.
"This is a great opportunity to change a lot of people’s minds, and to reach a group that might never have had to know or hear about gay people. Let’s go make some new friends … and win a few games.”


10:03 on a Tuesday morning
in the fall of an American dream
a man is doing what he knows is right
on flight 93

Posted by GLBT and Friends at 8:00 AM No comments: