To Block A Gay-Straight Alliance, Texas High School Shuts Down All Extracurricular Clubs 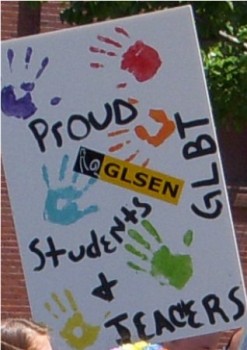 A Corpus Christi, TX school district has responded to a student's request to create a Gay-Straight Alliance -- by shutting down all extracurricular clubs on campus.
Flour Bluff Intermediate School District's move comes after its high school gained national attention by blocking senior Bianca "Nikki" Peet's request to start a GSA. Hundreds of people have emailed the district on behalf of Peet through a Change.org petition, which was also linked to by the Gay Lesbian Straight Education Network (GLSEN).
Texas A&M's GSA, which has been advocating for Peet, had called for a protest Monday, Feburary 28, 2011.
But Flour Bluff ISD Superintendent Julie Carbajal, in comments to The Daily Caller on Friday, said that there is no chance that district will approve the purposed Gay-Straight Alliance. She also has requested that the student group Fellowship of Christian Athletes meet off campus until they can determine if they are adhering to the 2005 school policy that only student groups tied to curricula are allowed.
By canceling all extra curricular clubs on campus, Flour Bluff ISD hopes to avoid the  Equal Access Act -- a federal law, passed in 1984, that requires schools receiving federal funding to offer "fair opportunities for students to form student-led extracurricular groups, regardless of their religious, political and philosophical leanings." The district still maintains that they do not have to follow the Equal Access Law.
Superintendent Carbajal claimed, “We need to be fair and equitable to all," but that is not how supporters of "Nikki" Peet see it.
From a statement from Paul Rodriguez, President of the Texas A&M Corpus Christi Gay Straight Alliance about the Flour Bluff ISD decision yesterday:
"What a sad, sad day in Corpus Christi. Hatred and intolerance prevails in Flour Bluff ISD. Rather than allowing the Gay-Straight Alliance to form at FBHS, Administrators have chosen the alternative route of dis-allowing ALL non-curricular clubs to meet on campus. Not only has this district turned its back on the students who could benefit from a GSA, but now has alienated the Fellowship of Christian Athletes and other non-curricular clubs on campus as well."
Texas A&M had given Flour Bluff ISD two options: approve Bianca "Nikki" Peet's request to form a GSA or disallow all extra curricula clubs at Flour Bluff High School. The group says that it is unfortunate that FBISD cannot -- and will not -- see that a GSA is essential to building that bridge of tolerance and unity amongst its students, and it's now brainstorming other ways to help Peet start her club.
Check back with Change.org for updates on this campaign.


Petitions by Change.org|Start a Petition »