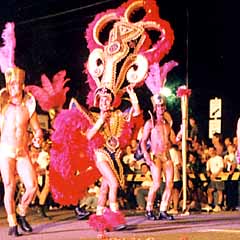 SYDNEY — Hundreds of thousands are expected to throng central Sydney for the colourful and irreverent Gay and Lesbian Mardi Gras parade, which this year is set to highlight marriage equality.The annual street party draws thousands from around the world and brings millions of dollars in tourism revenue to Australia, where gay weddings are banned by law and opposed by both major political parties.
"We will be sending the message tonight that our love is no different and it shouldn't be treated differently by the law," participant Alex Greenwich told AFP.
Greenwich, who is the national convenor of Australian Marriage Equality, said about 2,000 of the close to 8,500 mostly flamboyantly dressed marchers taking part would be in groups highlighting the issue of gay marriage.
"There are civil unions in Australia in different states but the key thing is ... that we (reject) we should have a second-class form of relationship recognition. The issue is about equality," he said.
Labor Prime Minister Julia Gillard has stated that she believes marriage should be between a man and a woman, but has encouraged debate on the topic amid what gay marriage supporters say is widening public support for change.
"I do believe that in our society, with our heritage, with our traditions, with our history, that marriage has a special place and special definition, so I've been very clear about that," Gillard has said.
The streets of central Sydney are expected to be awash with colour and music for the 34th parade -- one of best known gay pride events in the world -- which begins at sunset and winds along the Oxford Street shopping and nightclub area.
But participants say that despite progress on gay rights since the first Sydney Mardi Gras in 1978, when male homosexuality was still illegal in the state, the fight for equality goes on.
Peter Murphy, who took part in Sydney's first Mardi Gras -- which ended in a riot and more than 50 arrests after police forcefully intervened -- said the event had always had a sense of fun despite its serious message.
"It was meant to be dancing, it was meant to be music, costumes and frivolity and a friendly message," he said.
"The original concept is still there today, it's just unbelievable how huge it is. Mardi Gras has kept its character all the way in long in fact."