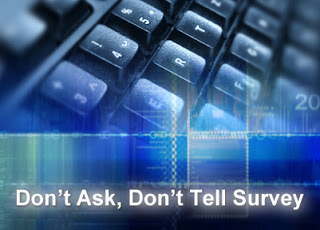 A majority of active-duty and reserve service members surveyed by the Defense Department would not object to serving and living alongside openly gay troops, according to multiple people familiar with the findings.
The survey's results are expected to be included in a Pentagon report, due to President Obama on Dec. 1, regarding how the military would end enforcement of the "don't ask, don't tell" law that bans openly gay men and lesbians from serving in uniform.
Some troops surveyed - but not a majority - objected strongly to the idea of serving with gays and said they would quit the military if the policy changed, said the sources, who spoke on the condition of anonymity because they were not authorized to publicly share details of the survey.
Defense Department officials did not respond to requests for comment.
NBC News first reported Thursday evening on the survey's findings.
In July, the Pentagon sent a survey with dozens of questions to 400,000 active-duty and reserve troops. It asked whether they had ever shared a room or the showers with gay peers, and how they might act if a gay service member lived with a same-sex partner on base.
Military officials did not say how many troops completed the survey, but at least 103,000 had done so just days before it was due, according to the Pentagon. A similar survey was later sent to military spouses.
President Obama opposes "don't ask, don't tell" and met briefly on Tuesday with gay rights activists to convey his commitment to repealing the law this year through legislation.
The U.S. Court of Appeals for the 9th Circuit is expected to rule Friday on whether the military can continue enforcing the ban while it considers a legal challenge against it.