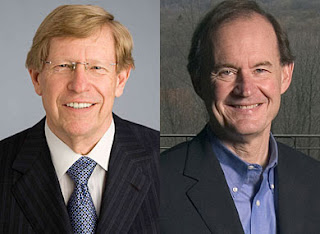 All the plaintiffs' side briefs - both the parties and the amici - have now been filed in Perry v. Schwarzenegger, and it's an impressive bunch. There are two parties' briefs: the Olson/Boies brief for the individual plaintiffs and the brief for the City and County of San Francisco. (San Francisco is also a plaintiff.) In addition there are more than 20 amicus briefs (posted here) from a variety of professional, academic, religious, civil rights and medical organizations.
The next step is that Proponents of Prop 8 will file a reply brief on November 1, and then oral argument will be heard December 6. There is no deadline for when the court must rule after it hears oral argument.
The individual plaintiffs' brief is the core document for the challengers; it is both excellent and not so interesting at the same time. The reason that it lacks excitement is that it does its job extremely well, which is to defend the powerful opinion below on two main points: that the well-established principle that marriage is a fundamental right should apply to same-sex marriages and that the only plausible purpose of Prop 8 was to render gay Californians unequal to other state citizens, a purpose that subverts the very core of Equal Protection doctrine. The fireworks in this case are in Judge Walker's opinion. Before reaching the merits,this brief highlights another important point: the argument that the Proponents lack standing to appeal.
I found the San Francisco brief somewhat more interesting because its role apparently is to put before the court an argument not focused on below: that "Prop 8 is not rationally related to legitimate government interests in light of California's particular constitutional and statutory guarantees." (emphasis added) Most prominent is the assertion that the Proponents' main argument in justification of Prop 8 - that it promotes "responsible procreation" - is exactly wrong in California because Prop 8 has zero impact on the state's parenting-related law.

California law distinguishes between marriage and parenting, treats lesbian and gay parents identically to heterosexual parents, recognizes that irresponsible procreation and childrearing are not limited to situations where children are conceived accidentally, and gives no preference to parents of different genders.  As a constitutional amendment, Proposition 8 could have changed any or all of these laws.  But it did not.  Having left unchanged the state constitutional provisions and laws treating same-sex parents the same as opposite-sex parents, Proposition 8 cannot plausibly be construed as a measure designed to encourage opposite-sex parenting over same-sex parenting.
Clever argument. I doubt that the Court of Appeals will hang its reasoning entirely on this hook, but what is between the lines in this brief is an invitation to the court to rule in a way that is limited to only one state, and does not implicate 44 other junior DoMAs.  A narrow ruling would be much less vulnerable if the case reaches the Supreme Court.

for more visit Hunter for Justice.