Target Apologized for Anti-Gay Donations, But Failed to Stop the Hateful Giving

By Michael A. Jones - 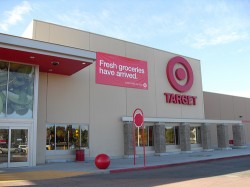 There's that old saying, "Fool me once, shame on you. Fool me twice, shame on me."
LGBT shoppers at Target should probably say that proverb a few times this afternoon. Earlier this summer, Target was blasted by gay rights advocates for giving $150,000 to a group working to elect Tom Emmer the governor of Minnesota. Emmer, for his part, thought gays were immoral, did not have the right to raise children, and shouldn't be allowed to get married. Emmer even made a personal contribution to a religious ministry that advocated death for LGBT people. Yikes.
In the wake of that dust up, Target issued a statement in early August apologizing to LGBT customers and LGBT employees for any offense their donation in support of Emmer may have caused.
"The intent of our political contribution ... was to support economic growth and job creation. While I firmly believe that a business climate conducive to growth is critical to our future, I realize our decision affected many of you in a way I did not anticipate, and for that I am genuinely sorry," said Target's CEO, Gregg Steinhafel. He even pledged that Target would revamp its process for giving political donations to quell some of the LGBT anger toward the company.
Nice sentiments, but apparently Steinhafel's 'genuinely sorry' was nothing more than window dressing. Because as Abe Sauer at The Awl spells out this afternoon, months after Steinhafel apologized for Target's anti-gay donations, Target continued to distribute a ton of cash to anti-gay politicians.
Among the donations that Target made to anti-gay candidates post-apology include:
Thanks, Target!
To this day, there are tens of thousands of LGBT people and straight allies who won't set foot into a Target. And folks continue to track money that they would have spent at Target, but decided to take elsewhere because the company gives money to people who would eliminate many, if not all, rights for LGBT Americans.
But what hurts the most, as Rascall Flatts might say, is that Target outright lied to LGBT customers this time around. "We're genuinely sorry," their CEO said. And then they continued to give tens of thousands of dollars to candidates with vehemently anti-gay positions. (And this isn't even including money that the company gave to PACs supporting anti-gay politicians like Rep. Michele Bachmann.)
Should this serve as a wake up call to every LGBT customer Target has? Shame on the company for giving bags full of cash to anti-gay politicians. But shame on all of us if there's no accountability for the company this time around.

Dear Target,
In recent weeks it was disclosed that Target Corporation had given $150,000 to a Minnesota political action committee that is funding candidates with ties to extremely anti-gay groups. The group in question that Target is funding, Minnesota Forward, has used that money to support a candidate named Tom Emmer.
Mr. Emmer has close ties to a group in Minnesota, You Can Run But You Cannot Hide, that advocates violence toward gays, lesbians, bisexuals and transgender people. Indeed, the leader of You Can Run But You Cannot Hide, Bradlee Dean, has said that it would be moral and righteous for religious people to commit violence against gay people. And Tom Emmer has consistently supported this group, welcoming them at GOP events, and going on record as calling them "nice."
Does Target agree with this?
I kindly ask you to not only denounce the Minnesota-based group, You Can Run But You Cannot Hide, but to also explain how money from Target -- long considered a friend to the gay and lesbian community -- could make its way to a politician that supports a group with such violent and hateful positions.
Thanks for your time.
[Your name here]

Posted by GLBT and Friends at 7:43 AM