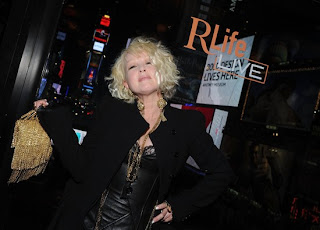 New York City — Cyndi Lauper and the Broadway cast of "Priscilla Queen of the Desert" joined forces last week for an entertaining evening to benefit the True Colors Fund, which raises money and awareness for LGBT (lesbian, gay, bi and transgender) issues.

The RLife Live benefit for the True Colors Fund was sponsored by Grey Goose and took place at the Renaissance New York Times Square Hotel on April 28. The fundraiser kicked off an online auction on charitybuzz.com, which runs through May 12, with proceeds to benefit LGBT youth housing projects.

DJ Mia Morretti and electroviolinist Caitlin Moe provided entertainment for the event before Lauper addressed the crowd to discuss the problems facing LGBT youth and the unique issues they face with homelessness.

"We're working hard to get all our straight allies involved because in every civil rights movement you need everyone – and that's what this is," she said. "I am finding it is not always a popular cause, but one that needs attention." In her heartfelt address, she spoke to the staggering statistics and the epidemic of families rejecting their children, and kids running away out of fear and despair."

Lauper has been a long-time advocate of LGBT rights. "More people straight and gay need to know what is going on in this country with their civil rights," Lauper commented in a previous interview with ChicagoPride.com about her True Colors tour, "The focus of the tour is to address the erosion of rights for the GLBT community, but in the larger context it's about people looking at civil rights. This country has the most diversity on all levels, but the rules are different for certain citizens of our country. It outrages me."

Posted by GLBT and Friends at 8:17 AM