Ricky Martin thought being gay was ‘evil’ before he came out 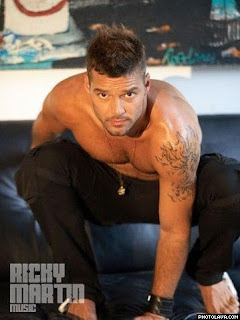 Ricky Martin has revealed that he believed homosexuality was “evil” before he came to terms with being gay.
The star, who came out last year, said: “Being Ricky Martin back then and what I was feeling were not compatible. I was the sex symbol and I needed to dance and I needed to make girls crazy and I couldn’t say that I was gay. It was a lot of struggle.
“If you add to that whether you call it culture, religion, society but what I was feeling, according to what I had in my mind, was evil and I’m very lucky today that what I have in my mind is love and I’m very happy.”
The father of two, 39, was appearing on The Tonight Show with Jay Leno.
Martin was honoured last month for his gay rights support by the Gay and Lesbian Alliance Against Defamation.
Posted by GLBT and Friends at 8:23 AM