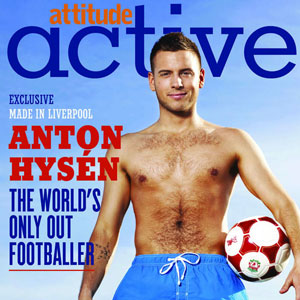 
The world’s only openly gay footballer, Anton Hysen, says others in the closet should not worry about fans’ reactions.
The Swedish star, 20, came out earlier this year, declaring that it was “f**ked up” that no other players had done so.
In an interview with this month’s Attitude magazine, he said it was “normal” for him to be out.
“I really don’t think it’s a big thing,” he said. “I mean, of course it’s brave but why should be it be brave?”
He added: “Maybe I’m stupid but It’s just so normal for me because I’m so secure with myself and my family. But I see it’s big for others and that it’s been taboo in football. That’s sad. Where are all the others?”
Liverpool-born Hysen, who plays for Utsiktens BK, is the son of manager and former Liverpool player Glenn Hysen.
He is only the second openly gay high-level footballer in history. The first, Justin Fashanu, suffered harassment and killed himself in 1998. A number of athletes from other sports, such as rugby and cricket, have come out in the last year.
“The worst thing a player can think of is the reactions from the fans, and their family and teammates,” Hysen said. “But if you’re secure in yourself, it shouldn’t matter. If you just focus on football and what you like and what you’re good at, it shouldn’t matter.”
He added that there were other gay people in his family and his footballing brothers have been “super-supportive”.
Hysen said he had declined all invitations to Pride events and gay parties, saying: “That’s not the right message, to be famous and go to parties and DJ. I’m a football player, that’s all. But to send a message to people who might have problems, that would be good.”
He added: “It’s good to have Pride but that’s not my kind of scene. To be out there with a flag, jumping around partying… The whole symbol, gay gay gay gay gay… I mean, we are gay, I understand that, and I understand the need for a sign that gay people exist.
“I’ve been to Pride, it was fun, but it’s too hysterical for me. I’d rather do something like this, a magazine, to reach out to people.”
Attitude, which is out now, features a double cover with England cricketer Steven Davies on the front.
Davies, who came out in February, joked to the magazine that it should headline the fact he’s single and looking for love.
He said: “I’m always on the lookout, you know. I just haven’t found the right person yet. I’m in no rush, but if that person came along that would be great.”
He added that coming out had been a “massive relief”.
“Everyone knows now, there are no secrets, and I can just get on and live the way I want to live,” he said.
Posted by GLBT and Friends at 8:16 AM