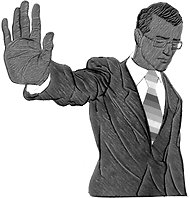 THE prestigious law firm King & Spalding has not fully explained its decision this week to stop assisting Congress in defending the law that forbids federal recognition of same-sex marriage. But its reversal suggests the extent to which gay men and lesbians have persuaded much of the legal profession to accept the basic proposition that sexual orientation is irrelevant to a person’s worth and that the law should reflect this judgment. The decision cannot be dismissed simply as a matter of political correctness or bullying by gays.
Gay-rights supporters have transformed the law and the legal profession, opening the doors of law firms, law schools and courts to people who were once casually and cruelly shut out because of their sexual orientation.
But it was a process that took a half-century to unfold. In 1961, a Harvard-trained astronomer, Frank Kameny, stood alone against the federal government. Fired from his federal job simply for being gay, he wanted to petition the Supreme Court. But at a time when all 50 states still criminalized sodomy, even the American Civil Liberties Union declared it had no interest in challenging laws “aimed at the suppression or elimination of homosexuals.” Mr. Kameny wrote his own appellate brief; without comment, the court turned him away.
Over the next quarter-century, lifted by gales of change in sexual morality and in the status of women, gay-rights advocates mobilized at every level of the legal profession. In the late 1960s, they successfully challenged the antigay civil service policies under which Mr. Kameny had been discharged. In 1973, a small group of gay lawyers formed the Lambda Legal Defense and Education Fund, enlisting the help of prominent heterosexual lawyers. They drafted legislation protecting gays from discrimination in housing and employment.
At the same time, gay-rights supporters began lobbying law schools, and then professional organizations like the American Bar Association, to adopt nondiscrimination policies. With these in place, they pressured schools to exclude law firms from on-campus recruiting unless they agreed not to discriminate against gay students in hiring. The Association of American Law Schools endorsed this approach. These developments paved the way for firms that had once fired suspected homosexuals to adopt their own nondiscrimination policies.
Changes in the profession ran in parallel with the evolution of jurisprudence on sexuality. In 1986, in Bowers v. Hardwick, the Supreme Court upheld a Georgia sodomy law. Five justices — one of whom told a closeted law clerk that he had never met a gay person — dismissed the idea of a right to gay sex as “at best, facetious.” But four justices disagreed — a harbinger. Within a decade, openly gay law clerks had become unremarkable.
In 1996, the year Congress passed the Defense of Marriage Act — the law it is now defending — the Supreme Court struck down an antigay state constitutional amendment in Colorado. Justice Antonin Scalia, dissenting, saw the tide turning. He tried to rewrite the narrative from one of a small and despised minority to one of an elitist legal corps disparaging ordinary Americans. The majority decision, he wrote, reflected “the views and values of the lawyer class from which the court’s members are drawn.”
Any doubt left about where most lawyers stood was eliminated in 2003 in Lawrence v. Texas, which involved another sodomy law. Lambda Legal led the challenge, helped by Jenner & Block, a firm with extensive Supreme Court experience. Other big firms, groups like the American Bar Association and scholars filed supporting briefs. The cumulative effect of decades of work by gay-rights advocates was that the best firms and many of the best lawyers were unwilling to defend sodomy laws on constitutional, let alone policy, grounds. The court agreed, holding in Lawrence that such laws demeaned the very existence of gay people.
No serious case can be made that an institution as powerful as Congress has a right to the services of the biggest law firms and the most credentialed lawyers. The Defense of Marriage Act is not unpopular, and while Congress may be indebted, it is not indigent. A thornier question arises when a firm withdraws from a representation, though in this case the quick withdrawal evidently caused no harm to the client. More troubling is the possibility that a firm might quit because of outside economic pressure rather than principle, though it is unclear whether such pressure played a role in this case.
As Mr. Kameny’s lone crusade showed, the legal profession was not in the vanguard of gay rights. Unlike Mr. Kameny, of course, the House will have excellent counsel on its side: a former solicitor general who resigned from King & Spalding to protest its decision. The world of legal professionals is still a diverse one where basic values collide every day. Respectable constitutional arguments for the Defense of Marriage Act will surely be made — but grounded in ideas, one hopes, not contempt.

Dale Carpenter, a law professor at the University of Minnesota, is the author of the forthcoming “Flagrant Conduct: The Story of Lawrence v. Texas.”

Posted by GLBT and Friends at 7:47 AM