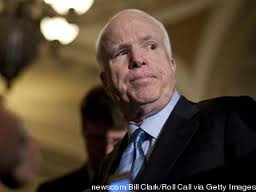 On NBC’s Meet The Press today, Senator John McCain disputed the validity to the preliminary findings from the DADT survey, and stated his opposition to a vote on repeal of Don’t Ask, Don’t Tell in Congress’ lame duck session.
HRC President Joe Solmonese issued this response:
“Obviously the senator doesn’t like the preliminary findings of the Pentagon’s DADT survey, which found a clear majority of U.S. service members are okay serving with their gay and lesbian comrades. The senator has known all along the study developed by the Pentagon Working Group was looking at how to repeal DADT—not whether to do so.
“McCain has said he wanted to hear from the senior military leadership. He heard loud and clear from Secretary Gates and Chairman of the Joint Chiefs of Staff, Admiral Mike Mullen, last February when both were firmly in support of repeal.
“McCain has said he wanted to hear from rank-and-file troops. He has just heard loud and clear from them through the survey. But he doesn’t like their answer– and is stonewalling, trying to run out the clock on repeal by calling for congressional hearings.
“The truth is McCain is increasingly alone in his irrational opposition to open service. Sixty-four percent of Republicans disagree with McCain and favor lifting the ban. No matter the evidence, McCain will use whatever tactics at his disposal to not only stop repeal from moving forward, but will hold hostage the most critical military defense bill to do so.”