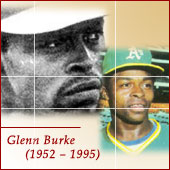 Baseball loves its streaks. Whether it be Joe DiMaggio's or Lou Gehrig's or Cal Ripken's, streaks have long been acclaimed and remembered, to the point some numbers are forever ingrained in fans' minds.
At the end of the new documentary about former Dodgers and A's outfielder Glenn Burke, a startling streak comes to light.
"Since Glenn Burke played his final game in 1979, 6,552 players have appeared in the major leagues,'' the screen reads. "Not one has come out as gay during his career.''
That 31-year streak will not be celebrated, for it shows how difficult the climate has remained for a gay baseball player to be open about his sexuality. It's not just in baseball. To this day, no active athlete in a major team sport has ever acknowledged being homosexual.
The environment was even more hostile when Burke played in the majors from 1976-1979, and the documentary "Out. The Glenn Burke Story", skillfully details his struggle for acceptance and the demons he fought until dying of AIDS complications at age 42 in 1995.
Burke, a native of Oakland who starred as a basketball and baseball player at Berkeley High, is depicted by friends and former teammates – including Dusty Baker, Reggie Smith and Davey Lopes – as a gifted athlete with a radiant but sometimes erratic personality. Some even credit him with coming up with the high-five.
A scout rated Burke at the top of his scale for running ability, arm strength and raw power, and yet he never made much of a dent in the majors, batting .237 with two homers in 523 career at-bats.
Some of those interviewed believe Burke was run out of the game once his sexual orientation was discovered – "It was the kiss of death for a ballplayer,'' Smith said – first by the Dodgers management, which traded him to Oakland, and then by A's manager Billy Martin.
The documentary tells how in 1980, Martin's first season at the helm of the then-woebegone A's, the manager used a homosexual slur in introducing Burke to his new teammates in spring training.
Soon after, Burke left baseball and found solace in San Francisco's predominantly gay Castro district, where he was embraced as a celebrity, and he came out publicly in a 1982 Inside Sports story.
Eventually, Burke fell into a life of drug abuse, contracted HIV, spent time in prison and became homeless. The A's lent him a hand in his final months, but some of the people who knew him raised the question of how Burke's life and career would have unfolded if baseball had been more supportive.
It's a question that will go unanswered as, 31 years later, the streak continues.