When in November Republicans won a majority in the U.S. House of Representatives many LGBT rights advocates were mindful that it would likely put an end to chances of passing the Employment Non-Discrimination Act over the next two years. Now, some LGBT rights advocates are turning their attention to President Obama and urging him to use his powers to compel companies the government contracts with to end employment discrimination on the basis of sexual orientation and gender identity.

Whether Obama would be prepared to use his powers in this way remains to be seen. He has in the past voiced support for ENDA but has not been seen to actively push for its passage. However, Obama has used his powers to extend federal partner benefits to gay employees and has sought to extend protections to federal trans workers. An executive order to further those protections would not seem implausible then, and would perhaps denote his intent to seek full legislative protections in the future.

From the Washington Blade:


Nan Hunter, a lesbian law professor at Georgetown University, said a directive protecting LGBT people would be a “terrific idea” because history has shown executive orders for non-discrimination often precede changes in law.
“I think the pertinent piece in terms of the civil rights history is that the federal contractor requirements were put in place prior to the enactment of the statutes,” Hunter said.
In 1964, President Johnson issued an executive order prohibiting most federal contractors from discriminating on the basis of race, color, religion, sex or national origin — prior to the enactment of Title VII of the Civil Rights Act, which provides similar protections in statute. Johnson’s directive could be used as a model for a directive protecting LGBT people.
Hunter said she sees no legal impediment to Obama issuing a workplace non-discrimination order for LGBT people and noted the federal government has “long had the custom” of instituting requirements for contractors that the majority of businesses don’t satisfy.
“That kind of executive order exists with regard to race, sex, religion, other protected characteristics — there is no reason why it could not be issued with regard to sexual orientation and gender identity,” she said. 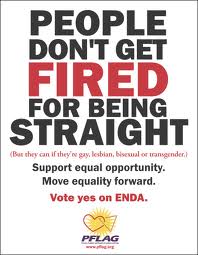 Current federal employment discrimination protections cover race, religion, sex, national origin, age and disability. ENDA, as introduced most recently in 2010, would add sexual orientation and gender identity to that list. As such, ENDA would prohibit public and private employers, employment agencies and labor unions from using a person's perceived or actual sexuality or gender identity as a reason to fire them or to not promote them, or as the basis of making other employment related decisions.

However, the legislation exempts businesses with fewer than 15 employees, as well as religious institutions. This change would not be applied retroactively.

For more information on ENDA as introduced in the previous Congress, please click here.
Unfortunately, the Democratic majorities in the previous Congress failed to take up the legislation due to concerns that there would not be enough votes to pass work place protections for LGBTs and strong resistance from certain groups who objected to gender identity inclusion. With the current Republican majority in the House of Representatives and a reduced majority in the Senate, the chances of passing the bill would appear even slimmer, therefore alternatives are now being sought.
An executive order would not be as encompassing as employment non-discrimination legislation and certainly could not replace legislative action, but it would, in a majority of cases, prevent the federal government from contracting with companies lacking an LGBT-inclusive non-discrimination policy, therein leading more businesses to enact inclusive policies. According to the Williams Institute the government currently contracts with 91,367 companies.
This would serve to protect only a limited number of workers, but without hope of an immediate remedy from Congress, and with individual states slow to take up LGBT-inclusive protections, an executive order – even considering its limitations in both scope and longevity – could be seen as a viable alternative in the short term and specifically could offer much needed gender identity-inclusive protections until a fully inclusive ENDA can be passed.