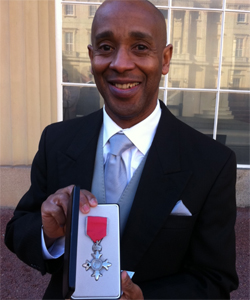 Aslie Pitter, who helped found one of the UK’s first gay football teams, Stonewall FC, has collected his MBE from Buckingham Palace.
The 51-year-old, who is the team’s reserve manager, was awarded the accolade in the New Year honours list.
He went to Buckingham Palace today with his fiance Alan, his sister Melita and his mother-in-law Margaret.
Mr Pitter had hoped for his father Vincent to accompany him but Mr Pitter Snr died several days after his son was named in the honours list.
After collecting his MBE from Prince Charles, Mr Pitter said: “It’s been an amazing experience. I just feel so honoured to be here and really it’s a recognition of the club I love.”
Liam Jarnecki, Stonewall FC chairman, said: “The whole club is delighted. Aslie’s dedication and service over 20 years has been an inspiration. There wouldn’t be grassroots football without people like him.”
Mr Pitter, an assistant manager at a Boots store, helped found London-based Stonewall FC almost 20 years ago. It is now the world’s most successful gay football club.