‘Glee’ Offers a Little Something For the (Lesbian) Ladies 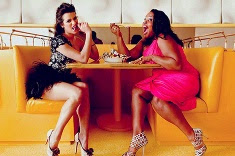 If recent rumors prove true, there could be a lot more girl-on-girl action coming to Glee.

This Tuesday, February 15, Glee’s big Bieber episode airs and in the midst of all of Justin’s hits, we will be treated to a Broadway number known as one of the best lesbian love duets ever.
While the other members of McKinley’s glee club croon, “Baby,” Mercedes (Amber Riley) and Rachel (Lea Michele) will rouse lady viewers with a diva-off set to the tune of “Take Me or Leave Me.” The number hails from “Rent,” the award winning Broadway musical set amongst LGBT 20-somethings battling HIV in NYC.
As if that weren’t enough, spoilers say when Gwyneth Paltrow makes her triumphant return as substitute teacher Holly Holiday, she’ll be encouraging Santana (Naya Rivera) to own up to her bisexuality in Sex-Ed class.